The Rosebowl is G.B.‘s most famous & longest running Invitational International. It is now in it’s 28th year and it is a testimony to the Wright family that it continues to attract top class teams from around the world. The competition has sections for Club, Composite and National Teams ~ with the Perpetual Trophy presented to the highest scoring team overall. The star team this year was undoubtably the Australia National team. Peggy Liddick [one of the world’s top coaches & Australia’s National coach] stayed on after Australia’s successes at the recent World Championships to oversee her up & coming gymnasts.
Last year Bristol Hawks were 3rd in the Club Team section with Heathrow 2nd and the very strong Canadian team ‘Champions’ taking first place. This year we fielded a young team with Olivia Bloodworth making her debut in the Bristol Hawks team. Olivia had a great competition nailing her new elements which she is preparing for her Level 2 Vol. competition in November. Claudia Fragapane continues to make great progress and was a whisker away from winning the Rosebowl for the highest scoring under 13yrs gymnast. This acholade went to Rushmoor’s own rising star, Amber Try, who also picked up a bronze medal in the beam final. Bristol Hawks two National Squad members Shannon Lee & Amy Sharp both made valuable contributions to our team score despite Shannon not being 100% well & Amy being in a transitional phase in her training with her new elements not yet ready for competition. Making a return from university to anchor our young team was Stacey Godden who was great asset on the first two apparatus but an unfortunate fall on her beam dismount meant she was unable to contribute to the team score on floor & vault. Like a true team captain she was quickly back out on the competition floor to cheer on the team who with the 4 scores to count and only 4 girls able to go up on 3 pieces of apparatus were really under pressure. The girls really pulled together and we were delighted when we realised that we had surpassed last year’s acheivement by winning the silver medals [2nd in the Club section] with ‘Champions’ again taking gold and Dynamo, also with a young and impressive team, in third.
In the overall standings we also improved by one position from last year finishing 5th with just Australia, Champions, & England ‘A’ & ‘B’ above us. A fantastic result for Bristol Hawks Team ~ Well done to all! 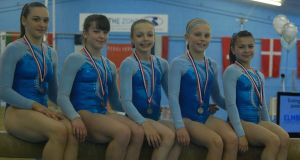 In the individual standings it was close between the top two Aussie’s. Britt Greeley, with a great Bar routine, just prevailed over her team mate Emma Collister, who was strong on both Vault & Floor. In third was the top Canadian Kristin Klarenbach and special mention to England ‘B’s Ruby Harrold who showed a lovely bar routine to come 4th. The Aussies showed their strength in the apparatus finals taking 3 out of the 4 gold medals on offer with Kristin Klarenbach for Canada preventing a clean sweep by winning Vault.
It was another memorable year at the Rushmoor Rosebowl which continues to combine high level competition with a friendly atmosphere which is second to none ~ Long may it continue!