The ever popular Rushmoor Rosebowl is Britain’s Premier International Invitational Competition open to Clubs, Regions & National Teams. It plays a unique and very important role in the British Gymnastic calendar allowing our gymnasts to feel the atmosphere of a big international team event and helping them to prepare for future international performances. With the team competition on the Saturday and an individual apparatus finals on the Sunday it gives the gymnasts a chance to experience the type of qualification & finals format that is typical on the World Cup circuit. With gymnasts from Canada; South Africa and two England Teams in addition to British Teams from far and wide there was a wealth of talent on show.
This year Bristol Hawks fielded its youngest team ever to the Rosebowl.With no senior age group members it was up to 14yr old Amy Sharp as Team Captain to lead, and what a good job she made of it! Amy has had to take a back seat since competing for Great Britain in France in March and is just starting to come back into full training. Her warm up competition, the BUG’s Invitational, went well and she increased the level of her routines a stage further [though not yet back to full difficulty levels] for the Rose Bowl. She took on a guiding role to the three new members of the team ~ Zoe Potter; Lauren Gore & Holly Downey & also to our youngest competitor ~ Claudia Fragapane; Amy stepped up to the mark posting good scores on all apparatus, achieving an individual 9th overall out of the 80 gymnasts competing and qualifying for two finals. She started strongly on bars, and put the individual disappointment of falling on her trade mark Free Cartwheel-Flick-Layout behind her to produce a well executed floor. She rounded off by sticking her vault, this was important as our team had no leeway [4 up & 4 scores to count]. This secured us 2nd place and the Silver medals behind our traditional rivals Park Wrekin who were delighted to win the Club Team Rose Bowl, City of Newcastle took the bronze medals. 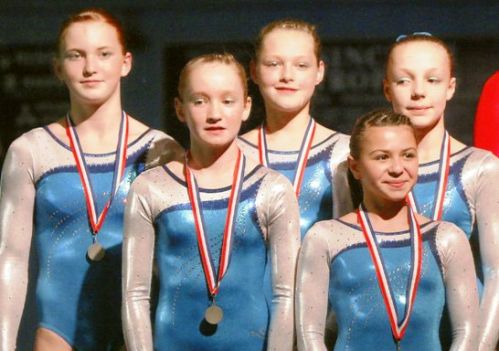 For a young inexperienced Bristol Hawks team equaling our 2nd place finish from last year hadn’t seemed possible at the outset but as the Sherman brothers say ‘Team work can make a dream work…etc. and in this case it was a great team effort. Zoe Potter, drafted into the team at the last minute to give us 5 girls up on beam, did her job by sticking her routine including the very new free cartwheel and helped not only to steady the rest of the team but also posted a score that boosted our team total. Holly Downey put the disappointment of not getting her sole circle on bars counted [costing her a 4 mark penalty] behind her to stick her beam ~ a great turn around from the last league match! ~ and she also produced her best ever floor routine. Lauren Gore jumped up the rankings performing a personal best bars and a fantastic vault which would have put her in the vault final if she had had time to work on her second vault! She also stuck beam [a major landmark there!]. Claudia Fragapane continued her winning ways putting in a sparkling performance which not only helped the team to silver but also won her a much coverted Rose Bowl for the highest scoring gymnast U’13yrs. This is a fantastic achievement for Claudia who was also =7th placed overall [with only National team members above her] and qualified for three finals. 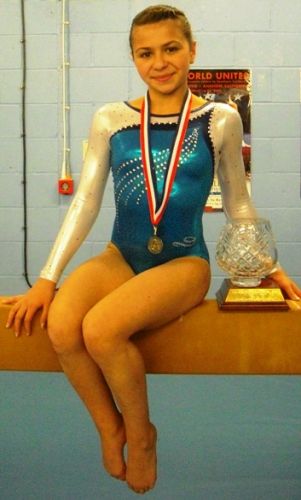 Canada’s promising Junior, Taylor Ricci, was a clear winner in the Individual Overall standings & went on to win gold in the beam final with a routine that included a double pike dismount. England’s ‘B’ team were steadier on the day than England ‘A’ & won gold in the National Teams Section. The South West Region also picked up a bronze medal in the Composite Team Section & it was pleasing to see Beth Northeast [Bristol School of Gymnastics] make the beam final. The overall team champions were England ‘B’ and Bristol Hawks improved our standing from last year by achieving 4th with only the two England teams & Park Wrekin above us! In the finals Claudia was 7th on vault where Kelly Sims [England ‘A’] won with beautifully executed Full twisting Yurchenko & well flighted & nailed Handspring Front. Claudia improved her performance on beam to gain 4th place. Amy competed a clean floor & moved up the rankings on this apparatus to gain 4th place, also on floor Claudia was 6th= with an action packed routine that drew high praise from the VIP artist Penny Warden[www.pennywarden.com]. On the bars Amy performed brilliantly winning the Silver medal with a routine containing an Edjova & Geinger ~ she only competed an easy dismount and with so much more in the pipeline this was a very pleasing return to competition for Amy. 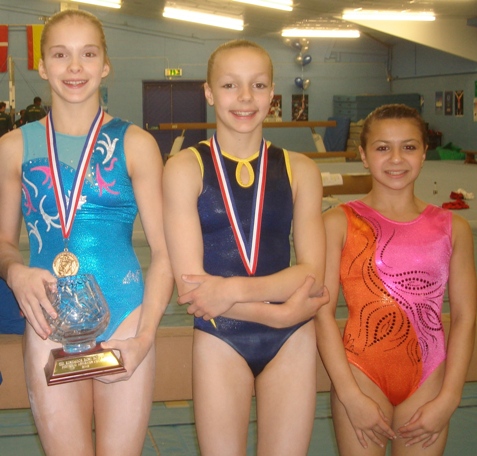 It was a great weekend for our club and our coaches were delighted that we have managed to maintain the high standards we have set ourselves in this competition over the years. Next year will be the 30th Anniversary and we would love to be back again to support the good work that Rushmoor Gymnastic Academy and in particular Colin & Bernie Wright have done & continue to do in providing top class opportunities for British & International gymnasts.