MIKE is a director & one of the founders of Hawks Gymnastics Club.

Mike has played a major role in the rise of gymnastics in GB and over the years has held many different roles on the South-West Regional Gymnastics Committee. He has run a successful family business for over 50 years starting out in Devon in partnership with his father Arthur. He was an elected Independent County Councillor in Devon.Together with his wife Elaine they developed Hawkeshyde Motel & Leisure centre where the original ‘Hawks’ gymnastics club was born. They moved to Bristol in 1987 to concentrate their efforts in gymnastics alongside their children. A devastating fire struck a week away from the opening of the new venture and they saw the building they had invested their efforts & finances in burn to the ground. Their tenacity and ability to seek out the positives enabled them to re-build and Bristol Hawks rose from the ashes. The club has gone from strength to strength under their guidance providing countless opportunities for people in Bristol and the wider area.
Mike’s professional background in civil engineering gave him the tools to design groundbreaking facilities for gymnastics in GB & the safety landing pit installed in the gym in Seaton was one of the first in the country. His skill & technical ability in conceiving the conversion of an old co-op building into a state of the art gymnastics centre that would support a family business was crucial to Bristol Hawks success. Re-grouping, re-designing & improving upon the original concept after the fire was both brave & inspired.
In 2014 “The May Family” were awarded an Honorary Rushmoor Rose Bowl for services to gymnastics. Bristol Hawks Directors Elaine & Mike May received the award after a lifetime of dedicated work developing British Gymnastics by taking on a large number of voluntary roles over the years; coaching, judging and officiating at international, national, regional and county level events; inspiring many young people to enjoy the sport of gymnastics; sponsoring individual gymnasts; developing groundbreaking facilities for gymnastics both in Devon [the original ‘Hawks’ gym] & Bristol and supporting their own three children to become international gymnasts for Great Britain. In 2018 Elaine & Mike became inaugural inductee’s of Bristol’s Sporting ‘Hall of Fame’ for their ‘Exceptional Contribution’ to sport in the city.
Here’s Mike pictured with Elaine Helen & James celebrating James becoming British All Around Champion in 1989. This photo was taken in the original Bristol Hawks building that was being converted & was soon due to fully open to the public. However it was not to be…… 3 months after this photo was taken the gym burnt to the ground and the May family had to re-group, re-build and after 3 years the gym was again ready to open which it did in 1992. 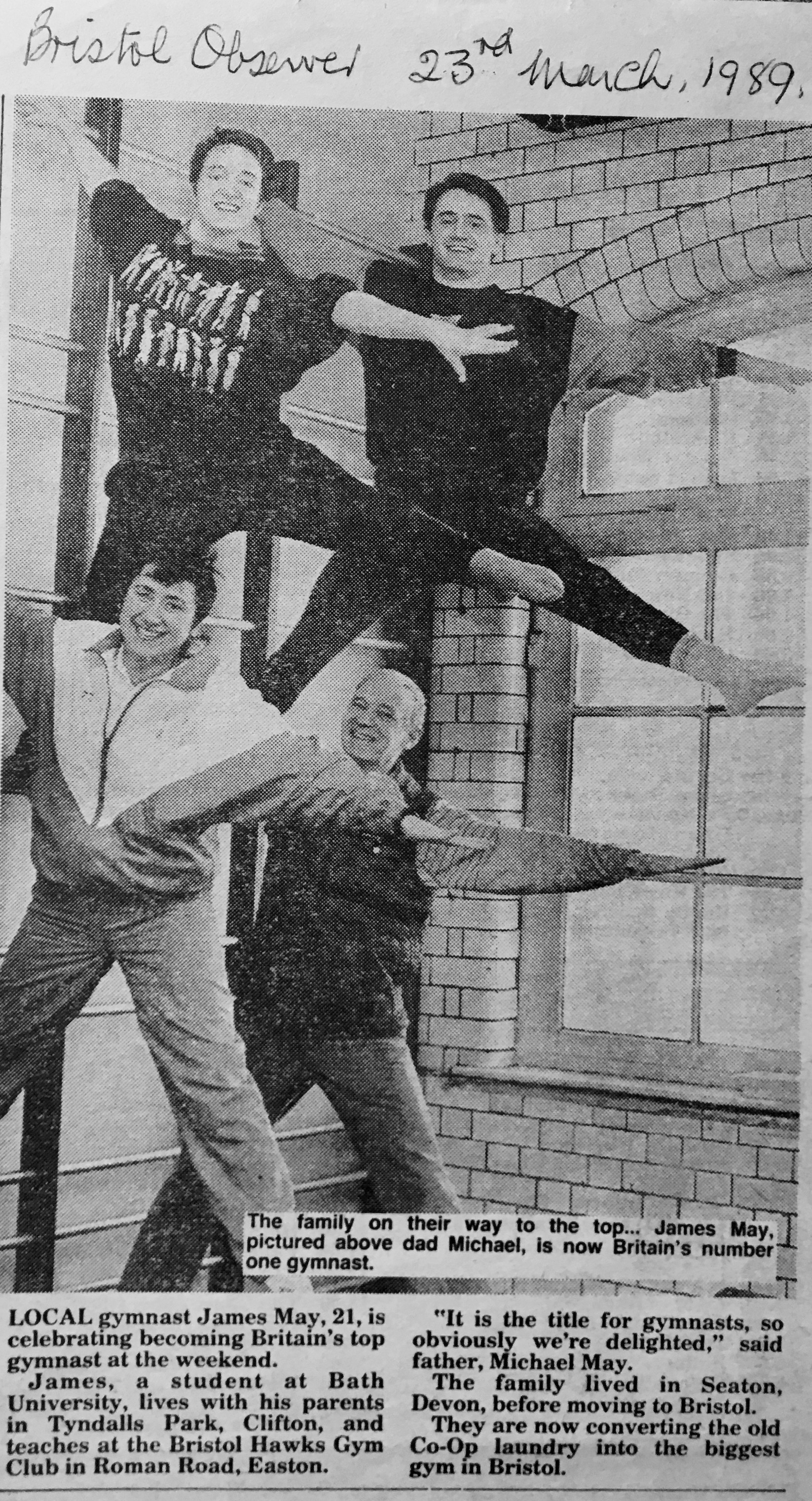