Caitlin is a Scottish International gymnast. She is part of the Scottish Performance Squad. She was first selected to compete for Scotland at the Malar Cup in Sweden in 2017 picking up a Team bronze medal; placing 4th All Around & qualifying for the Floor final in the Senior completion whilst still a Junior. She quickly established herself as a team member with a further selection for an International against Ireland. Her first Senior year started well with qualification for the second phase of selection for the Scottish Commonwealth Games Team. At the Scottish Championships in her first Senior year she came 7th All Around, qualified for two finals & won a bronze medal in the floor final. Having placed 3rd All Around in the British Challenge Cup in 2017 she qualified for the British Championships for the first time in her career and competed in the Senior British at the Echo Arena in Liverpool in 2018. Caitlin [centre] with Sofia & Megan at the Malar Cup 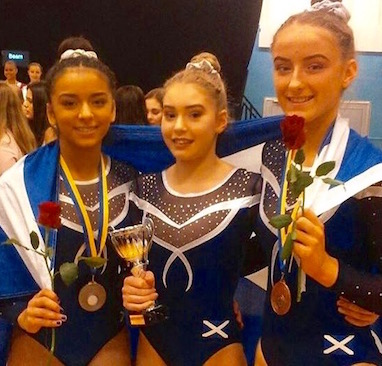