Great Britain’s longest running and most prestigous invitational international competition takes place over the last weekend in October every year. Hosted by the Rushmoor Gymnastics Academy and the brainchild of the club’s distinguished directors Colin & Bernie Wright the competition offers gymnasts the atmosphere of a big international team event and helps them to prepare for future international performances.
Our young reserve Robyn Lacey had the opportunity to experience the format by taking part in the ‘All Stars’ Team. She competed well with no major errors and gained high praise from the judges for her expressive choreography on floor. Our team started on beam ~ often a crutial apparatus in a team event ~ and Paisley Boyce [a first time member of our Rosebowl Team] did a grand job of putting in a good ‘first up on first apparatus’ performance taking the pressure off the rest of the team.Paisley also scored well for our team with her lovely precise floor routine. Holly Downey & Kathryn Heathcote both scored for the team on three out of the four apparatus. Most pleasing for Holly was her stuck beam routine with both ‘D’ elements performed cleanly. She also excelled on the vault with a well executed Piked Tsukahara. Kathryn performed exceptionally well on the vault producing a high flighted, tidy Piked Tsukahara which was the 7th best vault of the day and would have put her into the vault final if we had worked the second vault needed for finals day, never mind Kathryn we’ll work on that for next year! Our youngest team member Rowena Needham [11yrs] had a great all around competition and was the 5th highest scoring U’13 gymnast. She was particularly pleased with her successful flick layout on beam. The star of the day was Claudia Fragapane, with an outstanding all round performance. She collected the Rose Bowl as the Overall Individual Winner and made history as the only gymnast ever to win the Rose Bowl for the highest scoring gymnast under 13 years [which she won in 2010] and go on to win the Senior title. 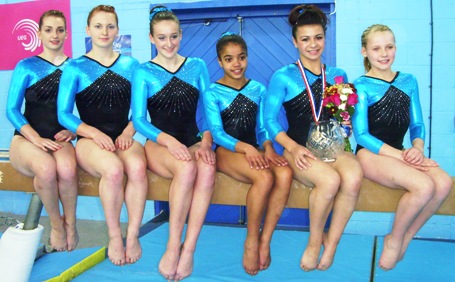 Claudia also made all four finals and on finals day we were proud that all her team mates came to support her. She didn’t let them down, winning both the vault and floor, second on beam and 5th on bars. This brings Claudia’s individual number of Rose Bowls to five [she won vault in 2011] a fantastic acheivement. 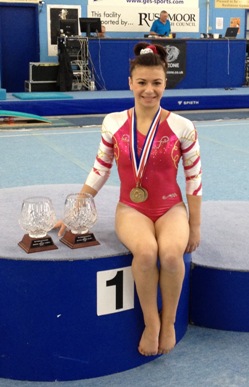