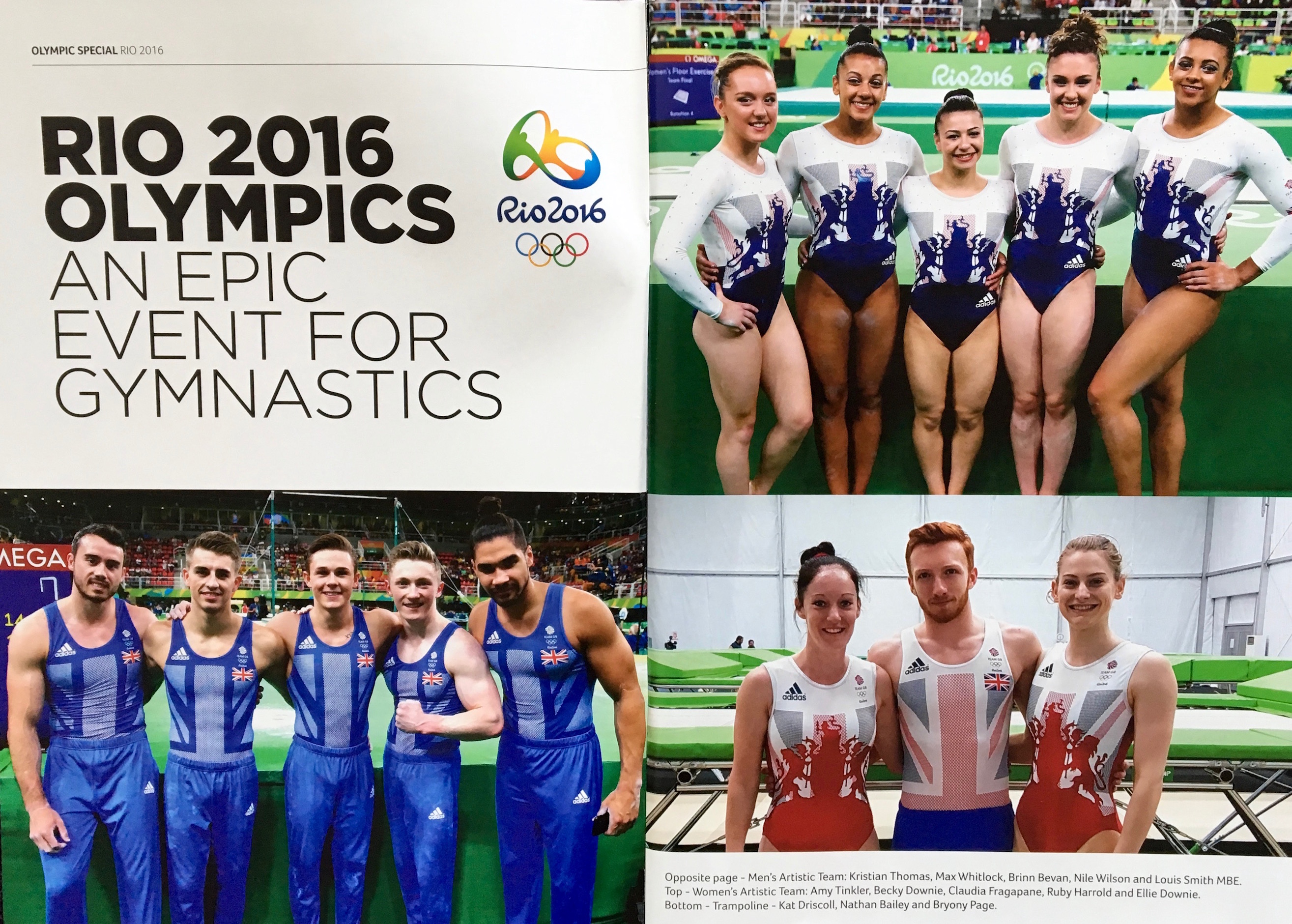 What a fantastic year! 2016 saw one of the proudest moments for our club when CLAUDIA FRAGAPANE realized her childhood dream and became an Olympian helping the British Women’s team achieve their best ever Olympic result in Rio. Claudia started the year off brilliantly winning British Women’s first ever All Around Medal at a World Cup event, she went on to win the English Senior All Around Title; Picked up yet another European Silver Medal [she has three now & one World medal]. Claudia also won the top accolade in Great Britain – the All Around British Senior Title in 2016.At the British Championships Claudia was also honoured with the ‘Master Gymnast of Great Britain Award’ and the ‘Federation of International Gymnastics Pin’ – which is awarded by the World governing body of gymnastics to World Level outstanding gymnasts that have achieved high results at more than one World Championships.

In the extremely competitive world of Elite Women’s gymnastics only one club in the UK produced two British All Around Champions in 2016: Bristol Hawks the gymnasts were Claudia who is the Overall Senior British Champion & AMELIE DOUGLAS who won the British Voluntary Level 3 Championships. Amelie’s performance has earned her a place in the Great Britain squad for 2017. We are immensely proud of these fantastic achievements, to be the best in your country takes dedication determination and a lot of hard work.

JAY FRANKLIN had a fantastic year attending training camps at the home of British Gymnastics Lilleshall. Jay is both County Champion & Double South West Champion winning both the Elite Level 2 & the South West Festival of gymnastics in the under 10 section. As a result of his recent success at the National Elite Grade Finals he has been re-selected as a member of the GB squad for 2017.

CAITLIN LOCHHEAD was our Rushmoor Rose Bowl & Premiership C Team Captain for 2016 she had a wonderful year. She won the South West Junior Challenge Cup and also the County Championships in the Junior Challenge Section. She was selected to represent the South West Region at the National Bill McLoughlin National Apparatus Team Challenge where her SW team took the Silver medals. Caitlin finished the year brilliantly by being top scorer in the top division & league at the West Country League Finals.

HARRY ANDREWS – competed for the first time in the Under 18 British Men’s Championships where he achieved a personal best score. He placed 17th All Around and was particularly pleased with his Parallel bars where he placed 12th.

EMILY EDGE competed in the British Championships for her first ever time. Emily qualified for the British by being one of just 18 girls in Great Britain to pass the notoriously difficult Elite Compulsory Level 1 in 2016. Emily was a member of the GB National Development squad for 2016 & was South West Champion in the Espoir age group winning on every apparatus.

Alf McCULLOUGH was selected to compete for his County winning silver at the south west festival. Alf also won team gold at the Baskervilles cup and individually won gold on the rings.
DYLAN HUNT won a National gold when he competed for the South West Region at the finals of the Club Grade 4. He also won vault at the South West regional qualifiers

THEO BIRAKOS was 5th All Around in the South West Club Grade 5.

BILL McCULLOUGH had his best year ever Winning National Gold with the South West Team at the Club Level 6 finals. Individually Bill also won silver All Round at the regional qualifiers and was first on the Rings.

Our West Country League Teams were highly successful in 2016. We competed in both the Premiership and Division One, entering five teams, winning 3 of the championships and coming 2nd in the other two.

AIMEE WESTLAKE won the Bristol County Championships in the Challenge Cup Espoir age group and was a member of both our Premiership ‘C’ team and our prestigious Rushmoor Rose Bowl International Invitational team.

FREDDIE BUTCHERS – Topped the rankings on Pommel Horse at the South West Club Level 3 Grades and was selected to represent the Region at the National Finals where he helped his team win the Silver Medals. He also won team silver as part of his County Team at the South West Festival but struck team Gold at the Baskervilles Cup where he was also gold medalist on both Pommel Horse & Parallel Bars.

ROXANNE PRICE won the Bristol County All Around Championships at Level 2 & passed her Elite Level 2 Compulsory Grade. She was a member of both our Rushmoor Rose Bowl team and our West Country League Premiership ‘B’ team that won the 2016 title.

CALUM HONEY Competed for both his County And Regional Teams. He was the top Vaulter at the South West Elite Level 2 competition & was selected to compete at the National Finals. His county team took Gold at the South West Festival & he led the Bristol Hawks Development 3 team to victory at the Baskervilles Cup where he was individual All Around Champion and also won 4 apparatus Gold’s.

MAYALEE OSOLA passed her Elite Level 2 Compulsory Grade. She was County Bar Champion in her age group & won a bronze medal All Around at the South West Regional Championships. She was a member of both our Rushmoor Rose Bowl Team & our Premiership ‘C’ West Country League Teams.

SHAY VAN-HINDS won the South West Championships in Elite Level 3 & he also led his team to victory at the Baskervilles Cup in the Development 4 section. Individually he was All Around Champion and won apparatus gold on the floor vault & high bar.

SHANTAE AMANKWAAH was the top scorer in the South West region at the Grade 6 on the Vault Beam & Floor. She is one of the 8 Bristol Hawks gymnasts that all achieved distinctions, the highest-level passes, at the Regional grades.

KAMANI ALLCOTT is the South West Elite Level 1 8yrs champion he was a member of the Bristol County Team that won gold at the South West Festival. He also won gold on both Floor & Parallel bars at the Baskervilles Cup.

TOBY STEWART was selected to compete for Bristol County in the South West Festival where his team won gold, he also won gold as part of Bristol Hawks winning team at the Baskervilles Cup.

POPPIE ABBOTT & LEXI HUNT both passed their Compulsory Grade 4. Poppie was also selected to represent the South West Region at the National finals where she helped her team to become National champions.

HAZEL CHAMBERS, MIA WILSON & KATE HOBBS all gained distinctions in their National Grade 4. Kate also represented the South West region at the National Finals where she too helped her team to win the National title in this grade. Kate has had a great year also winning the County Title at Level 4 in her age group. Mia won bars beam & floor at the County Level 4 10 year old age group & Hazel is the County Champion in the Level 4 11+ year’s age group.

Lily PEDWELL ROSIE CHAMBERS & ISLA MILLS all gained Distinctions in their grades. Lily also medaled in the All Around Level 5 9yrs County championships; Isla & Poppie are the Level 5 County Champions in their age groups & Lex medaled both in the All Around & on the Bars.
Beyond the medals come other important achievements Hazel, Rosie, Lexi & Lily were all fantastic team captains this year providing great support and encouragement to their team mates.

POPPY EDWARDS won the South West Compulsory Level 5 & both the County Championships and the South West Voluntary Level 5. Poppy was crowned South West Region’s Combined Champion for 2016. Poppy was a member of our winning West Country League Premiership ‘A’ team.

HELEN POTTER was also presented at the British Championships with the ‘Master Coach of Great Britain Award’ in recognition of her work producing numerous World Level International gymnasts for Team GB.