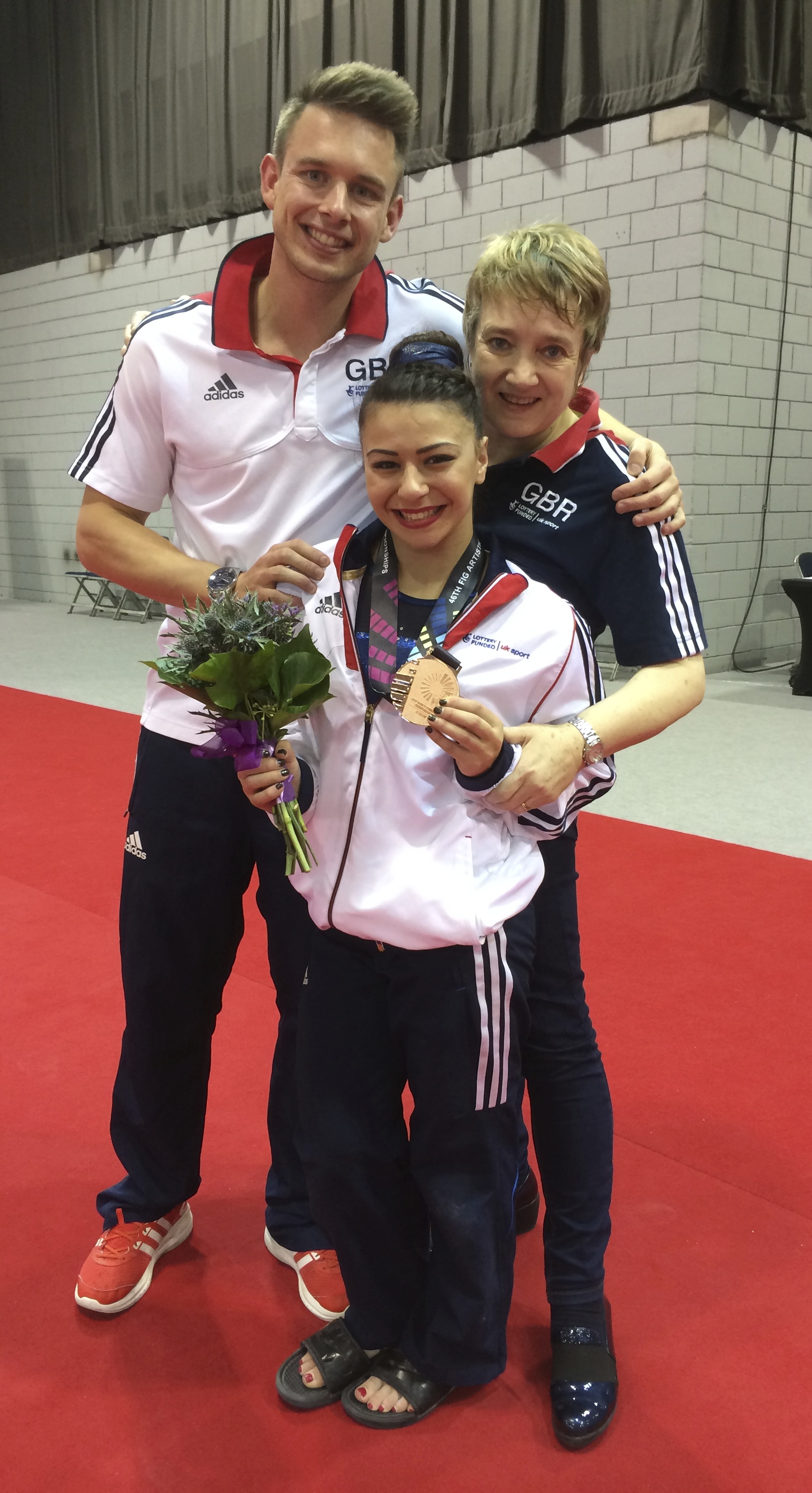 CLAUDIA FRAGAPANE – The World Championships was a major target this year. It’s always important but this year even more so as it was the qualifier for the Rio Olympic Games. Every country brings their top team and this year a record breaking 87 countries took part. Despite an ankle injury sustained at the first trial for the event Claudia battled through to not only gain selection for the GB team but also to play a crucial role in both our Olympic Qualification and Team Final result. Claudia coped well with the extreme pressure of the three up three to count competition format. She hit all her three apparatus playing a major part in the GB team’s historic Bronze Medal. This was the first time any nation outside the traditional powerful 4 has won a team medal since 2003 and it was Britain’s FIRST EVER Team World Medal. Claudia also qualified individually for the World Floor Final for the second year in a row – this for those who know the difficult rehabilitation Claudia had to go through in the weeks coming up to the Championships this was an incredible achievement. She is currently ranked 7th in the World on floor.
Claudia also won a fabulous European Silver Medalist on Floor was 6th AA & Vault; 4th on Beam.
Claudia is British Champion on Vault & was the only gymnast to qualify for all 4 finals at the British Championships picking up a host of medals including 2nd in the All Around.

IZZY DAVIS – became English Champion on Floor in her age group. She achieved fantastic results across the board at the English Espoir Championships in addition to her gold on floor she also placed 3rd in both the All Around and the bars.

JAY FRANKLIN – was part of the Bristol County under 10 team that won Gold at the South West Region’s Gymnastics Festival; Baskervilles Cup All Around Individual Champion in Dev. 2 age gp.
At the South West Elite Level 1 Jay All Around Champion at the National Finals. Jay was the top scorer on the pommels in the country in the 8 year old age group. 6th overall in Elite Level 1 in Great Britain – this result won him a place in the GB National Squad.

At ‘The Spark’ Competition – All the Bristol Hawks girls that took part achieved either a Gold or Silver standard & SHANTAE AMANKWAAH, TAMSIN HILDER , ELISSA HUKE & ROSIE CHAMBERS all top scored in their respective levels.

MIA WILSON passed her Elite Compulsory Grade 4 and was a leading member of our West Country Premiership ‘A’ team that won the finals for the third year in a row. Mia’s scores counted on every apparatus & she was the top Individual scorer in the competition.

At the South West Regional Grade 4 Bristol Hawks were the top 4 highest scorers All Around. ISABELLE 1st All Around; HAZEL CHAMBERS 2nd All Around & 1st on Range & Conditioning set. KATY HOBBS took the 3rd All Around spot; TIGER LILLY placed 4th All Around & CHIARA placed 6th

NOAH FORD – pommels champion at Baskervilles Cup & 3rd in the All Around at the South West Elite Level 1.

8 of our boys squad selected to represent the South West Region at the National Finals of the NDP with medals won in 4 of the age group levels.

ALEXIE HUNT – stepped up a level this year to join our Gold medal winning West Country League Premiership A team.
At the South West Regional Grade 5 Alexie top scored on both Bars & Range & Conditioning. Poppie Abbott was top on the Vault and was 2nd All Around. Both girls gained Distinctions.
Alexie is also SW Age Group Level 5 Bar Champion and Poppie also picked up medals in the same Championships on both Vault & Beam.

ELIZE WAITS & EMILY EDGE – both passed the Elite Compulsory Level 2 which, as anyone who has taken part in it understands, is one of the sternest tests in Great Britain for young gymnasts.
They were also both part of Bristol Hawks medal winning Rushmoor Rose Bowl team – defying the odds at this prestigious International Invitational event where every routine of our 4 gymnast team counted towards the team total – an impressive team effort was achieved that day.
Individually they were first and second in the South West Combined rankings for the 11 year old age group and went on to compete at the GB Age group Championships where they were ranked 18th & 9th in Great Britain.

ROXANNE PRICE – South West Champion in the 10year old age group and represented the region at the National Finals. She rounded the year off well by being the top individual scorer at the West Country Premier B League Final.
MAYALEE OSOLA – was also a member of the medal winning West Country League Premier B team.

Bristol Hawks boys were members of the Bristol County under 10 team that together won Gold at the South West Region’s Gymnastics Festival. They also won the team Silver medals at the Baskervilles Cup Development 3 competition. ALF McCULLOUGH, SHAY VAN HINDS & FREDDIE BUTCHERS
Freddie Butchers was 3rd All Around in the SW Club Grade 2 and represented the Region at the National Finals where he helped the team win the bronze medals. Shay Van Hinds is Baskervilles Cup Development 3 High Bar Champion and was 2nd All Around [and 1st on 4 out of 8 apparatus] at the South West Regional qualifiers for Elite level 2. He scored an incredible 9.9 out of 10 on the vault at the National Finals to place 5th in the country in his age group on this apparatus.

Baskervilles Cup Champion Rings 7year old KAMANI ALCOTT
At the South West Club Level 4 Theo Birakos was yet another Bristol Hawks gymnast to storm up the rankings, placing 3rd All Around and securing South West team selection to the Great Britain Final where he won team Silver.
Also making the South West Team for the first time this time at Level 3 was DYLAN HUNT he also helped his team to Silver medals at the National Finals.

BILL Mc CULLOUGH was yet another Bristol Hawks Boy selected for the South West Team to the National Finals after picking up the Silver All Around Medal at the Regional Championships. Bill currently competes in Level 5 and was instrumental in securing the team Silver Medal for the South West at the finals in Birmingham.

HARRY ANDREWS – Under 16 South West Champion a title he won at the South West Gymnastics Festival. Harry put in a personal best performance at the Under 16 British Championships placing 17th Overall and achieving a top ten placing on the Parallel Bars a great achievement.

RORY WEAVERS was selected as a coach for Great Britain to the World Championships and awarded Britain’s highest coaching qualification ‘International Performance coach’.

JAMES MAY was given the responsibility by the International Gymnastics Federation of being in charge of the High Bar judging at the Glasgow World Championships he has also been selected to judge at the Rio Olympics Test Event in 2016.